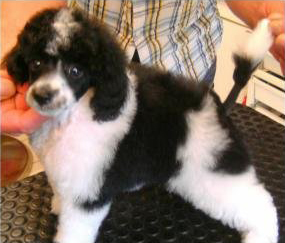 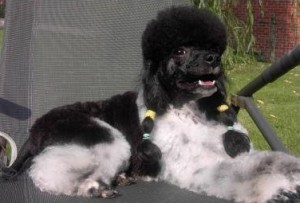 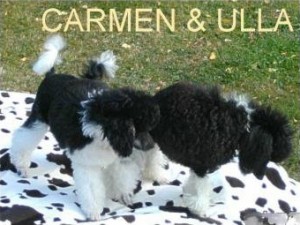 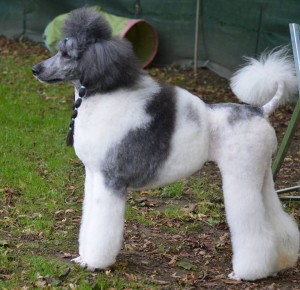 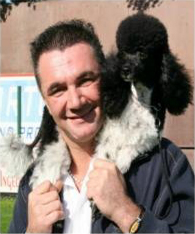 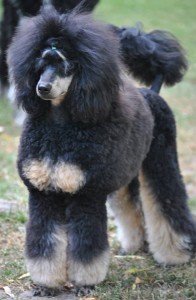 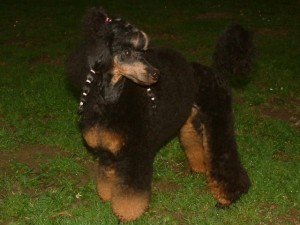 The poodle is a breed which does not lose its hairs. And the skin of the poodle does not secrete this protective fat common to canines and other animal species. These two phenomena make that the poodle is an animal which can be very well accepted by allergic and asthmatic persons.

It has the peculiarity to adapt itself very easily to the profile of its master and to the various situations in which it is confronted. Wise with an old person, he can be full of energy and funny with a child or show himself very dynamic with a sportive master. It is thus above all a general-purpose dog, considered as one of the most intelligent dog, affectionate, player, active, cheerful, cunning, elegant, sensitive. Its memory and its liveliness make it an easy subject to educate, it becomes integrated into the family unit and remains very attached to its master. It will bring you a lot of satisfaction. It is the ideal dog of company. The breed also distinguishes itself by a nice quiet to the everyday life. 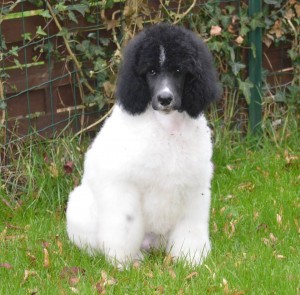 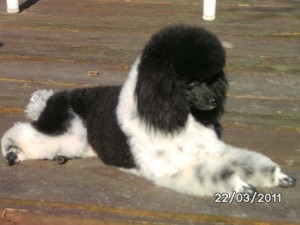 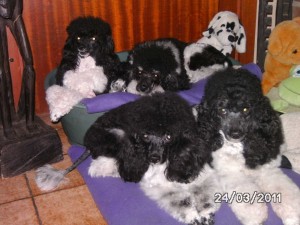 The poodle is one of the most former breeds of dogs, but we were never able to determine exactly its true origin. The history of the monochrome poodle and the bicolor or parti – colour is the same.

The ” poodle of origin, ” that we also called before the ” big dog of water “, was monochrome black or white, or white with black tasks, known under the naming of ” parti-colour “.

We can already see them on reproductions dating of the Roman period as well as in antique Greece. Its country of origin, according to former stories, would be Germany, Russia or England, but certainly not from France. And especially, this demonstrates well that the ancestor of the poodle was also two-coloured!

The experts would arrive at this thesis according to documents dating 1555 of Konrad Gessner and Doctor Fitinger.

The ancestor of the poodle was not only white or black, but also white with black marks. But with the time, these black marks disappeared and it was stated that the first big white poodle was seen in England; a little bit later appeared big black poodles, in Russia.

And nevertheless in 1880 it was stated in the standard of the poodle (established in Berlin) that the breeding of the poodle should be made only with monochrome subjects… since, France (in 1936) based itself on this old standard!

By the documents of the year 1555, the experts are persuaded that the appearance, originally, of spots which we know at the ancestor’s of the poodle, did not occur by crossings, but could simply appear as transfer.

George Stubbs (1724-1803 ) was a very known artist. His paintings were exposed in all of the art galleries of the world. He was the first British animal painter who represented animals as they really were. The photo of the big poodle “Vulcan Champagne Polka-Punkt”, made in 1953, looks a lot like the painting of the artist of 1758.

In November 1964 were bred the last ones party – colour in the breeding “Vulcan”. Fortunately, the other well known breeders who were fan of these party-colour continued to breed these dogs.

Thanks to these committed breeders, the two-coloured poodle did not disappear, as the standard of 1880 would have wished it.

The first standard in Germany, concerning this variety of colours was created by Mrs Eckstein (president of honour of the ADP) because she had so, in 1959, by uniting two black subjects, two-coloured puppies.

During a congress of a scientific commission, the variant of the two-coloured was presented to the FCI. The FCI required from Mrs Eckstein to prove this variant of colour by 10 generations of lineages. Mrs Eckstein succeeded, in 1980, by basing herself on the established standard of 1959 and then she was able to generalize the conditions for the breeding (and the judgments). The peculiarity of this Poodle which can be a toy, a dwarf, a middle one or big one (royal) is to possess a named “piebald”. 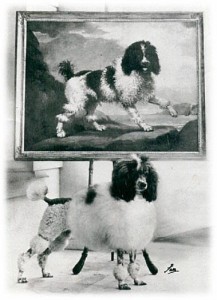